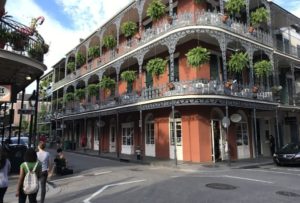 From that point, there has been a steady production of art that has not waned. But in the 21st century, we have seen a second Renaissance of sorts. Certain areas of the city, such as the St. Claude area, have seen young artists move in who can afford the rents in these transitional neighborhoods. This is much the same phenomenon that Soho saw in the 50’s, Oakland and the Bronx a couple of decades ago, and so on.

Today, on certain days of the month, most of the galleries and studios are open around the city, attracting mostly local collectors to see up and coming artists living here. Many if not most have moved from other cities as part of a wave of young people attracted to the city after Katrina, providing an infusion of youth, talent and creativity to the scene.

There has certainly never been another time in the city’s history with more artistic ferment. The international-scale Prospect show now triennially brings visitors from around the world to see what’s emerging in the New Orleans art scene.

At the New Orleans Art Exchange, we like to keep up with what’s going on in this scene, and always make a variety of great New Orleans art available to you online – from all the periods of art the city has seen.

Sign up here for our newsletter and emails to alert you when new art arrives! Or visit us at www.neworleansartexchange.com to see what we have available now. Buying from us is an easy and friendly experience. Love art? Stop by our New Orleans Art Gallery for a chat! Your satisfaction is 125% guaranteed with every purchase of our New Orleans paintings!