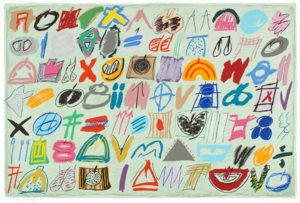 With its bold grids of colorful symbols, Ida Kohlmeyer art is instantly recognizable. This New Orleans mother-turned-artist produced hundreds of canvasses and sculptures renowned among New Orleans’ finest.
Who was Kohlmeyer, what sets her art apart, and where can you get your hands on one of her works?

Ida Kohlmeyer (1912-1997) was raised in New Orleans and lived a typical life until she was in her mid-thirties. She graduated from Tulane, married, had a daughter and obtained a B.A. in English literature. Then she discovered art. Like Robert Rucker, she started out with classes at the John McCrady Art School. This convinced her she wanted to pursue art, so she enrolled in Newcomb College and received a master’s degree.

In the summer of 1956, she traveled across the country to attend the Hans Hofmann school in Massachusetts. The world of abstract art opened up for her, and she never looked back. She adopted a distinctive style and symbology, and her art began to turn heads. By the late 1970s, national galleries were showing her work.
Kohlmeyer said she was compelled to make art. In addition to teaching at Newcomb College and the University of New Orleans, she continued to paint, sculpt and develop her style until her death in 1997.

The typical Ida Kohlmeyer art piece is a grid crowded with abstract, vividly painted symbols. She invented this symbology under the influence of Mark Rothko and the Abstract Impressionist school of painters, who sought to express deep emotion through shape and color. Kohlmeyer united this impulse with the heavy lines and vibrant hues of the Mexican folk art she’d first seen on her honeymoon.
Later in her life she brought her bold shapes into the third dimension with painted sculptures of metal and wood.

Where to Find Ida Kohlmeyer Art

Ida Kohlmeyer’s paintings can be found on the walls of many New Orleans galleries. However, because of their staggering overhead prices, they can’t offer real deals. On the other end of the spectrum is a site like Ebay, where cheap art abounds but many sellers can’t be trusted.
Balancing the expertise of a professional gallery with online affordability is the New Orleans Art Exchange. Our stock includes Ida Kohlmeyer art as well as paintings by other iconic New Orleans artists. Because we live on the internet instead of one of the bustling and expensive streets of New Orleans, we can cut the prices of a brick-and-mortar gallery by up to half.