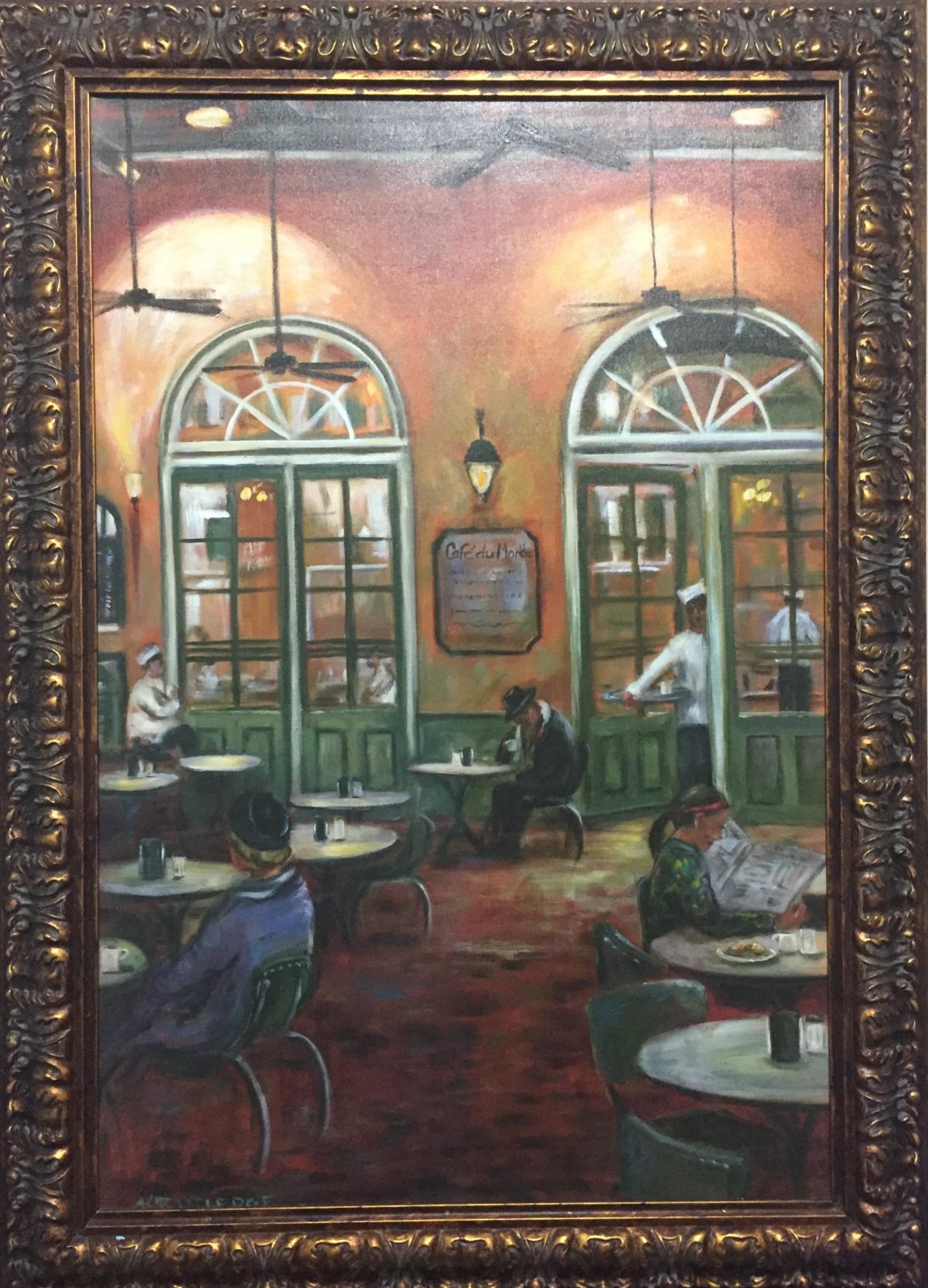 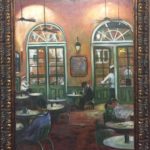 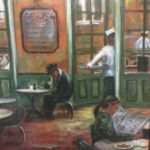 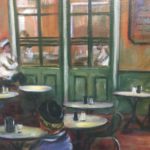 Yes, I have been to Cafe du Monde in broad daylight when it is bustling with both tourists and locals, but I have also been as a younger man, with my n’er do well buddies, at around 7 a.m. after a night out in the Quarter. This reminds me of one of those occasions — particularly the tapped-out dude in back, barely holding on! Framed and ready to hang.

Here is a link to the Cafe du Monde website.

And a link to the Wikipedia article on the French Market, where it is located. Lots of history there!

“Since 1791, there has been a marketplace along the river in the French Quarter. The French Market is still a focal point for shopping and entertainment, and is a great place to spend a summer afternoon.

By 1864, Italian immigrants had arrived in significant numbers to the French Quarter, Marigny, and Ninth Ward, many setting up businesses in the stalls of the French Market. Throughout the 1890s and well into the turn of the 20th Century, the French Market had a distinctive Italian flair to it. Italian families were such a strong economic and social force in the Quarter that St. Mary’s Church became known as “St. Mary’s Italian Church” to distinguish it from “St. Mary’s Assumption Church,” the church of the German community Uptown.

As population demographics shifted, the Italians moved out of the French Market proper, opening up Central Grocery and Progress Grocery, across the street on Decatur. The Perrone family moved the Progress Grocery business out to Metairie in the 1990s, and Central Grocery has become more of a sandwich shop than a grocery, serving their world-famous muffuletta.

Behind the Butcher’s Market were the stalls of the Seafood Market. Fisherman and oystermen would bring their product down from the lake via Bayou St. John and the Carondelet Canal, then by cart from the turning basin at Basin Street to the riverfront.

New Orleans’ original Vegetable Market (Halle des Légumes) was the main produce stand for the Quarter from the 1880s to the 1930s.  In the 30’s, the entire French Market underwent extensive renovations, all part of several WPA projects to beautify the French Quarter.  Buildings were renovated and several that were destroyed in earlier years by fire or storms were re-constructed.  The Vegetable Market was re-located from the triangular patch by Ursulines Street to two blocks down, in what then became the Farmers’ Market.  During this time, the Public Belt Railroad worked in conjunction with truck farmers and others from Jefferson Parish and other points up the river to bring produce into the Quarter by rail.  Farmers also used the Orleans-Kenner RR interurban streetcar line to get from Kenner to Uptown, then switching to trucks to get their goods into the French Market.

Café du Monde is a must-visit in the French Market, as it is the oldest tenant of the market, dating back to 1862.

The modern visitor to the French Market has one big advantage over the shoppers buying meat and vegetables for the evening’s dinner–anyone who gets tired of the heat can duck into one of many air-conditioned shops and restaurants on their way down to Esplanade Avenue and the Old US Mint!”