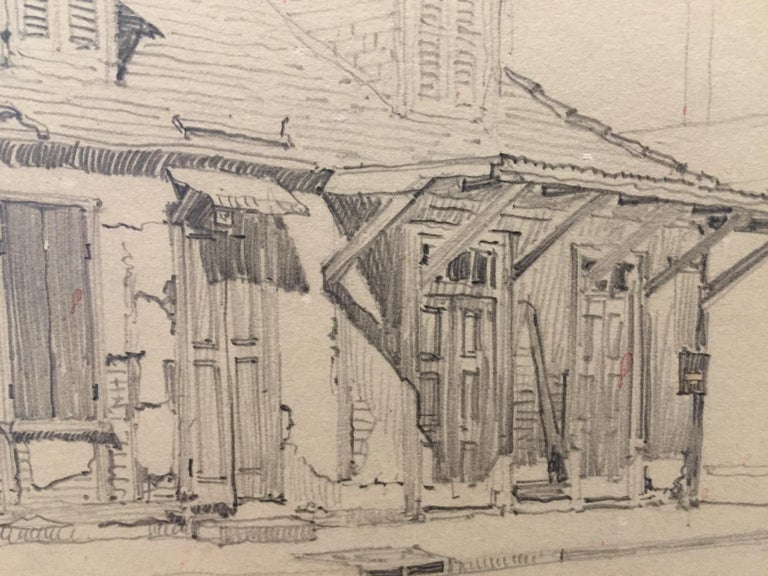 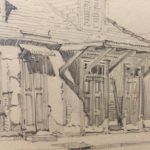 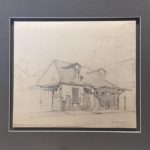 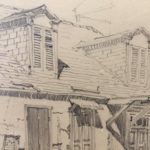 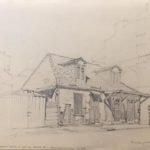 An original pencil sketch of a very notable New Orleans building, Lafitte’s Blacksmith Shop, by the famous New Orleans artist Morris Henry Hobbs. This is the oldest bar building in America, and one of the best bars in the French Quarter still today — dark, murky, very New Orleans.

I have included a photo of it as it looks today. Lafitte’s Blacksmith Shop has more stories than anyone could ever tell — some true, some doubtful. But the true ones are very cool — for example, it’s a fact that poor Irish and Italian dockworkers used to stop by in the 1930’s for a couple of shots of whiskey before going to their back-breaking, low-paid work.

The Pirate Lafitte story? Nobody knows for sure. At any rate, a prize for a lover of New Orleans who is also a collector of serious art. Prints by Hobbs are valuable, but these originals are very much more so. Comes expensively floated in a triple-mat, ready to frame as you wish.

A very famous New Orleans artist, with TWO solo exhibitions at the Smithsonian and having work in a host of museums among many other honors.

Biography from The Artisfun Gallery

Morris Henry Hobbs, etcher, engraver, painter, illustrator, woodcarver and teacher was born on January 1, 1892 in Rockford, Illinois. He studied drawing at the Art Institute of Chicago and with Ernest Dean, Clarissa Keith, and Ralph Fletcher Seymour, primarily illustrators. He later branched off into the study of architecture, and was identified with that profession for many years.

In 1921, several years after his return from overseas service with the American Expeditionary Force at which time he lost his hearing, he moved to Toledo, Ohio, and practiced architecture. He traveled throughout Europe, including, England, Belgium and France to draw, paint, and study etching. One of his small prints was accepted for an exhibition by the Brooklyn Society of Etchers, and his work began to appear here and there in exhibitions. This was in 1926 and 1927, when his first etchings and dry points were made. In 1930, after he returned to Europe to work and study, he made a series of plates of England, France and Brittany.

Early in his career he had the rare distinction of having two one-man exhibitions of his works at the Smithsonian Institution. Later, Hobbs was drawn to New Orleans in 1938 with plans for creating a series of small prints of the French Quarter and many of the historic buildings scattered thoughout the old section of New Orleans. He lived there for the remainder of his life. He formed the Society of Louisiana Etchers and was it’s first president. Two summers were spent as a resident colonist at the McDowell Art Colony, Peterborough, N.H., where he started a series of etchings of the old Beacon Hill district of Boston.

By 1950, Hobbs has become acquainted with the tropical plant family known as Bromeliaceae and had built a small greenhouse at his country home in Mandeville, where he spent weekends photographing and sketching the plants. He was awarded first prize in 1953 by the Chicago Society of Etchers for his dry point entitled Vresia Splendens.

During his career, Morris Hobbs was known to have created many Architectural drawings; he painted nudes, landscapes and still life works, and made wood carvings. He worked in oil, watercolor, and pencil, as well as, being a master etcher and engraver. Hobbs taught etching for many years and many of his students went on to become famous artists in their own right.

Morris Henry Hobbs died at the Ochsner Foundation Hospital in New Orleans, Louisiana, after a brief illness, on January 24, 1967.

Here is a Wikipedia article about Lafitte’s.