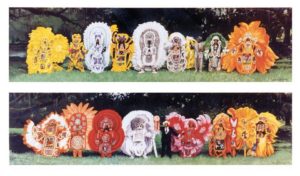 Mardi Gras Indians art is one of the favorite collectibles of people who love New Orleans, whether residents or not. And it’s no wonder why: the Mardi Gras Indians perfectly capture the eccentricity, history and richness of the Crescent City.

Influenced by the Native Americans they came in contact with during the 19th century, New Orleans’ black population began to form their own “tribes” as social entities. They dressed in rich hand-made costumes and paraded about the city, sometimes encountering other tribes. In the early days, these meetings could end up in violence. But as time went on, the violence was subsumed by symbolic competition, embodied in chants, songs and taunting jibes.

On Mardi Gras day, each tribe gathers at a certain traditional meeting place before striking out into the city. To be elected chief of one of these tribes is a great honor in the black community. One can also be chosen as “Spy-Boy” or any of a number of other titles. (The Spy-Boy, for example, runs ahead of the tribe scouting for “enemy” tribes).

The elaborate beaded costumes are made mostly by the male members themselves. Far from being considered effeminate, this activity is associated with the competition for superiority. Many of these costumes end up in museums, as the hand-work can be utterly dazzling, including complete scenes made entirely of beads.

You can see Mardi Gras Indian art here and there in New Orleans, as it is a favored subject for the city’s artists. Both painters and photographers treat the subject. It represents a wonderful opportunity for an artist to show off their technical abilities, precision, treatment of color, and ability to capture the spirit of the character wearing the elaborate outfit.

If you are searching for Mardi Gras Indian art, like the painting pictured, we at New Orleans Art Exchange will happily help you find wonderful examples by various artists. Just visit our website and send us a message!