Knut Heldner and Colette Pope Heldner have become icons of New Orleans art. This is not only because they painted scenes in and around New Orleans, but also because their story is a uniquely New Orleans art story. And of course, it is not often that a husband and wife are both painters who often paint in a similar style.

Knut Heldner gets his start as artist

Knut Heldner was born in Sweden, emigrating to America at the end of the 19th century. He took various odd jobs in Minnesota, including in the lumber business, as his interest grew in art. His first venture in the arts seems to have been art classes he took at a fine arts school in St. Paul. There is a record of him winning a $100 prize in the state fair, and of his beginning to show his paintings in Chicago around that time. 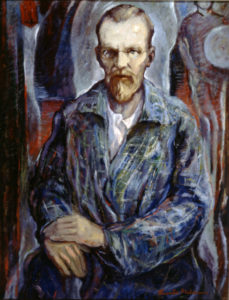 A self-portait of artist Knut Heldner

He began teaching painting at the Duluth Academy of Fine Art, where he met and married one of his students, Colette Pope (who always referred to herself afterwards as Colette Pope Heldner). After eloping (!), the  pair moved to New Orleans in 1923, taking up residence in the French Quarter, which was then a bohemian outpost and rather run down. It was around this same time that William Faulkner and other bohemians were living in the Quarter.

The Heldners’ studio on St. Peter Street was a hub for artists and bohemians. In New Orleans, they developed their most familiar style, which they shared: an impressionistic, loose, colorful approach. This can be seen in their most iconic paintings of the Louisiana swamps and French Quarter scenes.