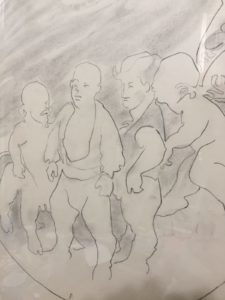 When many people think of New Orleans artist George Dureau, they think “edgy.” Many relate his work to that of his friend Robert Mapplethorpe and not without reason. Dureau actually strongly influenced Mapplethorpe, in addition to being his friend. And both photographed and drew male nudes in avant-garde, even controversial ways.

Dureau grew up in New Orleans and was very much a New Orleans painter, and is heavily collected in the city. But his work is very seldom based on local subject matter. His photographs are collected internationally by collectors who can appreciate the sometimes slightly disturbing images as alternative images of beauty rather than designed to disgust. New Orleans Art Exchange has carried many Dureau drawings over the years; fewer of the photographs, since they tend to languish waiting for a sophisticated enough collector to come along.

Though you might think Dureau would be a dark or intense character from his art, he was apparently a genial, usually light-hearted and friendly fellow – even a “character” of sorts who might stop his bike ride, dismount with his camera and ask to take a photograph of you. Again, this goes back to how his work is often mischaracterized as being “heavy.” He didn’t see it this way – to him, it was merely beautiful. Spend some time researching the life and work of New Orleans artist George Dureau and you will be amply rewarded.