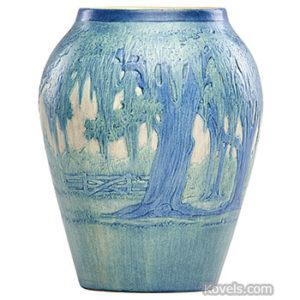 The South – and New Orleans art – lay broken and impoverished after the close of the Civil War. The arts, in particular, were set back decades. The class that had once sponsored artistic endeavors was reduced to merely rebuilding their lives. There wasn’t much interest or money to be turned towards the arts. This was particularly evident among New Orleans artists.

But in 1886, an arts program opened at Newcomb College in New Orleans that would inspire and engage not only New Orleans artists, but Southerners as a whole. Led by William and Ellsworth Woodward, fine artists in their own right, the school created a pottery program for women that would spawn some of the finest hand-made pottery of its time. Even when measured on a national basis. Today, some of these vessels can bring upwards of $10,000.

Back then, it was thought that the physical work of handling the actual throwing and firing of the pots was too strenuous for women. So the women students did the design while a series of accomplished male potters handled the pot creation. They included George Ohr and Joseph Meyer.

Some of the more famous vessel designers of the time were Sadie Irvine, Henrietta Bailey, Mary Sheerer and Harriet Joor.

The program went beyond the famous pottery. The Woodwards themselves were painters, and aspiring painters from across the South arrived at Newcomb for training. They eventually went out into the world to ply their craft beyond the sphere of New Orleans.

Both Newcomb pottery and other art media share a recognizable style, somewhere between Art Nouveau and Art Deco. Some of this is simply the art style of the era in which they were being created. Some is a distinctively Newcomb twist. Today, anyone familiar with Newcomb Pottery can quickly identify a Newcomb pot on someone’s mantelpiece. Or recognize it when it comes up in an auction.

We commonly deal in art from this period (here’s a painting, in fact!), so if you are interested in learning more about, or acquiring, works of art from this influential period in New Orleans, please let us know!