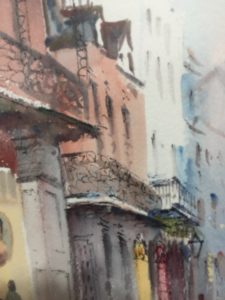 However, there did not begin to be a significant number of New Orleans paintings until late in the 19th century. Even at that time, there were more etchings and drawings done, many for publications in national magazines, than oil paintings.

Not until the early 20th century did oil painting in New Orleans really take off. This was when there was a Renaissance of sorts in the arts. Certain leaders in the arts tried to whip up an artistic community after a long period of dormancy that followed the Civil War. The Woodward brothers at Newcomb College were part of this Renaissance. At the same time there was a literary movement centered in the French Quarter. William Faulkner was part of this in the 20’s, living in Pirate’s Alley and writing his first two novels there.

During the mid 20th-century, abstraction became mainstream in serious art centers such as New York. Many New Orleans painters continued to paint the city and scenes around it, resisting the move to abstraction. They also painted iconic figures in the city: jazz musicians, other artists, even politicians. Later, painters such as Ida Kohlmeyer did bring serious abstraction to the city.

Today, there is a vibrant mix of art styles in New Orleans, from realism to conceptualism. There are now many good painters who work in contemporary styles. But there is also a strong contingent of artists who continue to make paintings of New Orleans. Sometimes, with a twist, such as those of James Michalopoulos. For both locals and visitors, hanging a painting of such an evocative city on the wall can stir fond emotions.