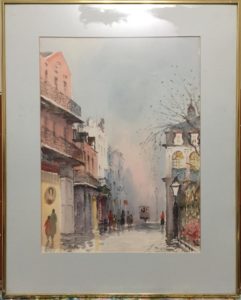 A painting of the French Quarter by Nestor Fruge, at New Orleans Art Exchange

New Orleans is a city of infinite charm and historical interest, and the preponderance of paintings of the French Quarter is evidence that this unique neighborhood is foremost among the city’s attractions.

New Orleans artists have been painting the French Quarter through three distinct phases. As early as the mid-19th century, both New Orleans artists and artists and journalists from elsewhere attempted to capture the charm of the city in paintings, etchings and drawings. Two etchings from Harper’s Magazine just prior to the Civil War illustrated remarkable scenes in the city. One of them showed ships being unloaded on the docks on the Mississippi River at the edge of the Quarter. Another pictured the market running along the river. Here people of every race shopped for fruit and vegetables. What is interesting to note in the market etching is that it is obvious that some of the shoppers are homemakers and others are servants or even slaves shopping for the families they serve. Another interesting note is the presence of people with the distinctive mixture of features characteristic of those with mixed Native American and African blood, something you still see now and then in the city.

The second phase of French Quarter painting was its descent into a slum around the turn of the 20th century, when the French no longer predominated and Americans had moved to the area now known as “Uptown.” This period was romanticized, as many artists and writers seeking cheap lodging with character chose the Quarter. Despite its forlorn appearance at the time, painters enjoyed its character, perhaps even more than they might have if it were more pristine. The decay was attractive to them.

The final phase of paintings of the French Quarter was after the mid-twentieth century, when the French Quarter had been brought back to better condition. Today, it contains the most expensive space in the city. And still, artists love to paint its streets, buildings and meandering crowds. What is wonderful is how much of the architecture from the first phase is still intact. And of course, Jackson Square and the St. Louis Cathedral have not changed since the mid- 19thcentury.

You can see some of these wonderful scenes at the New Orleans Art Exchange online art gallery, so check on often to see what’s new in our inventory!